These five movies, this whole April marathon was honestly a vacation for me. The quality of the films we watched was solid, but the highlights of the marathon made it all worthwhile. And so without further ado, here’s how it all went down:

My vote: Shawn Yue as ‘Jimmy’ in Love in a Puff. 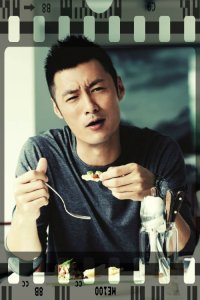 The film is a sweet, silly romantic comedy that brought a fresh look to the well-worn drama. Yue’s on-screen chemistry with co-star Miriam Yeung Chin Wah carries the picture and it’s mostly due to his charisma and down-to-earth performance. Jimmy just looked like a fun guy to be around. He’s the type of guy who goes to parties, is one of the guys–but that can also be a sweet, loving man for a woman with a broken heart. A close second would have to go to Kang-woo Kim. His conflicted detective’s emotional break during the last twenty-minutes of Rainbow Eyes was well performed, but he was mostly forgettable before then. Jay Chou was serviceable in an engaging teen drama while Seong-su Kim played dysfunctional boyfriend “to-a-tee”. Lee Seon-gyoon reminded me of Paul Rudd, he’s got a puppy dog smile, serious but sincere approach to his character in Romantic Island. I really enjoyed the physicality he brought to the role.

Secret wasn’t my favorite movie in the marathon, but Gwei Lun-mei’s performance stuck out. She did well playing a student hiding a strange secret, as well as struggling to connect with Jay Chou’s Ye Xianglun. The two students have developed a friendship that has potential, but for some reason–all is not what it seems. Ms. Lun-mei brought a lot of truth to her performance and I thoroughly enjoyed watching her work. Seo-hyeong’s performance as a nymphomaniac desperate to be in a healthy relationship was well done too, but suffers from the film falling flat during the third act. Miriam Yeung Chin was solid, but I honestly don’t remember the quality of her performance, and that should tell you something there. Lee Soo-kyeong played a runaway from home trying to find herself while traveling the world. She was cute, naïve, silly and the performance shined through in mainly those three aspects. Gyu-ri Kim honestly felt like one of the weaker aspects of Rainbow Eyes. Her delivery was dry, and even for a detective story–she was as dull and uninspired as the black screen, white lettered credits that rolled once the movie had ended. 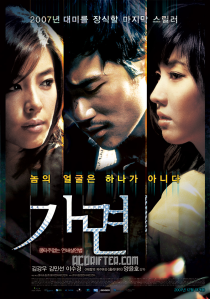 This is a tough call. When I think of a ‘conversation starter’ a movie that has me talking with friends for hours (or days) after I’ve seen it is what I think of. Great movies generate conversation for decades. I don’t think any of these five films are ‘great’, but a few are good–and three did generate conversation. Rainbow Eyes brings up so many issues that go on in the real world and I sat there moments after trying to piece my thoughts on the film together. Rape has always been a black eye on society–so that men raping other men in the army served as a key point in this film really gave the story some weight. Repressed feelings of love for someone of the same sex can result in violence or ‘bashing’ of other homosexuals who are more comfortable with who they are. Again, compared to the other films in the marathon, this theme was introduced and addressed well with the finale really being a thought-provoking one. Secret was interesting because we had to watch two students try and develop a friendship while existing nearly twenty years apart. The twist of the film is leaked here a bit, but the science fiction element of the movie was just the flair a teen drama like this needed to really get it’s intended audience to feel…something. Love in a Puff is here because of how well dialogue between characters is handled. Not only were the two leads written with wonderfully silly banter, but the wise cracking supporting cast added color making the film an entertaining one to watch. I still think it’s strange to write a romantic comedy around the smoking laws of the land–but the characters in the story make it work. With a bad directing and poor writing–Love in a Puff wouldn’t be a third as good of a movie it ended up being.

Yun-ho Yang is winner of a 2014 L&L award for Best Director.

Now before you jump to conclusions and think you know which film is going to win for best picture–STOP. Rainbow Eyes was a well written crime-thriller that handled it’s twists and turns like a well-tuned sports car. My favorite scenes in the film–the opening scene of the woman singing mixed in with love scenes was a phenomenal start–and the rest of the film followed suit. For a movie about serial murders and rape, this movie did not have a lot of action sequences. It did not matter, however, as Yun-ho Yang’s steady hand shaped the film into a sad, beautiful, disturbing tale of broken hearts, slit throats, and sexual abuse. The only movie I feel like competes with Rainbow Eyes’s direction is Ho-Cheung Pang’s work on Love in a Puff. Although the best part of the story is the supporting cast, the two leads have a good chemistry aside from some choices with the direction of the story; nothing really felt out of place. It’s one thing to have a great story–but it’s a whole other level of mastery to be able to take that story and characters and be able to paint us a picture. On this point alone, is why I give Yun-ho the nod over Ho-Cheung. Another truth that I’m not sure I have the capacity to avoid is that drama often outclasses comedy in categories like this for whatever reason. Perhaps because comedy’s usual purpose is to entertain, the direction doesn’t go to far past that goal. Love in a Puff, as hilarious as some parts of it were–isn’t nothing more than a romantic comedy. A well written one, but a rom-com nonetheless. 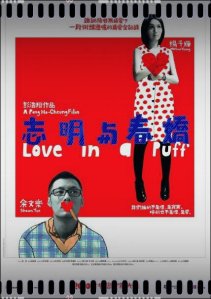 Considering the overall theme of this marathon–date night movies–Love in a Puff embodied everything I had in mind when planning this marathon in early March. It was funny, it was sweet, but there were some moments of truth throughout the film. The scenes featuring the smokers all gathered outside gossiping and swapping urban legends was one of my favorite moments of the marathon. Although the last bit of the movie wasn’t nearly as good, I still felt like it was a film I’d like to revisit once a year or so. Rainbow Eyes fits into the group of “once was enough thanks”. I was tempted to re-watch it at some point in the film, but it was so well wrapped up toward the end that I decided not too. The biggest issue I had with Rainbow Eyes was the one loose thread at the end of the picture. What is trying to leave it open for a sequel? Who was the killer? Was there more than one killer? These weren’t questions the film brought up, but ones I thought off when left with the ending Rainbow Eyes gives us. The other films in the marathon were entertaining, but Love in a Puff stands at as a movie that I’d actually buy for my collection.

This marathon was entertaining, and I found a few more directors who I’m trying to find more work from. I hope you enjoyed following me during this marathon–5 movies to share with that special someone or maybe even a group of special someones.

Be sure to catch my discussion of the awards on the next SVRadio!